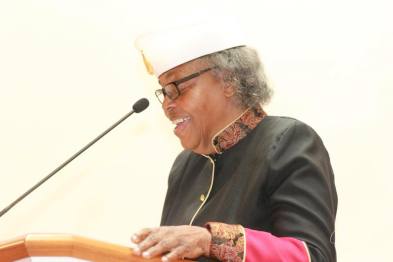 is the Founding Pastor of the Philippians Church of Christ Holy Disciples.

Upon preaching her first sermon in 1964, Pastor Woodhouse officially entered the gospel ministry. She was later ordained in January 1965, and shortly thereafter, she began holding services in her home which, at the time, was located at 2204 Old Great Bridge Road. The ministry was initially called the Church of Christ Prayer Mission. However, on Sunday, May 15, 1966, the name was formally changed to Philippians Church of Christ Holy Disciples. The church was first established in the 700 block of Liberty and Craig Street in the Berkley Section of Norfolk, VA and Pastor Woodhouse served in that location for seven years. Afterwards, she moved the church to a small storefront building at 1929 Liberty Street in Chesapeake, VA and the congregation remained in this location for over 20 years. In the late 1980s, Pastor Woodhouse was compelled to pursue building a new church, and it was during this time she initiated the process for this endeavor. In 1995, the new edifice, the current sanctuary, was completed and has been located at 1927 Liberty Street in Chesapeake ever since.

In addition to her longevity in ministry, Pastor Woodhouse’s persistence throughout the course of her years of service is also quite admirable. Her commitment to her faith, her congregation, and the community enabled her to persevere. In fact, after careful research, the Philippians Congregation has been able to determine that Pastor Woodhouse is among a group of the first female ministers/pastors in the Tidewater region to initiate and oversee the building of a new church; more specifically, the first female minster/pastor in the City of Chesapeake to accomplish such a venture.

For her service in ministry and to the local community, Pastor Woodhouse has received several honors and awards, such as: an honorary doctorate from Providence Bible College and Theological Seminary; a certificate from the National Board of Addiction Examiners; several appreciation certificates from the City of Chesapeake Juvenile Court System; and a plaque from Lexington Who’s Who for her achievement as an Occupation Industry Professional. She is also a member of the Chesapeake Humane Society, Chesapeake Chapter of the NAACP, Hampton Roads Urban League, and the National Association for Female Executives. Pastor Woodhouse was also presented with a Commendation from the House of Delegates of the Commonwealth of Virginia by Senator Lionell Spruill, Sr. (then, Delegate Spruill).

As Pastor Woodhouse commemorated five decades in ministry (January 2019), this milestone celebration highlighted her servant leadership and dedication to both her church and the surrounding community. As well, the courage and resilience she has exhibited in the face of opposition and challenges. For the past fifty-plus years, Pastor Woodhouse has undoubtedly impacted many lives through maintaining a positive presence throughout the community and contributing her time, energy, and resources in meaningful ways. She has indeed established a remarkable legacy, and her exceptional service, exemplary leadership, and extraordinary faith will certainly be recognized for generations to come.